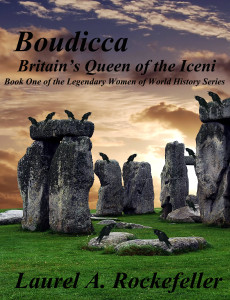 Why is The Morrígan’s raven crying? Only Britons with hearts for true liberty know!

In 43 CE Roman conquest of Britannia seems all but certain — until a chance meeting between King Prasutagus of the Iceni and a runaway slave of royal decent from the Aedui tribe in Gaul changes the fate of the British islands forever.

Rise up for liberty with the true story of Boudicca: Britain’s Queen of the Iceni and discover one of the most inspiring stories in history!

Based on the accounts of Roman historian Tacitus and supplemented with archaeology presented by the BBC. Told through the eyes of a 5th century mother and daughter facing the Saxon invasions.