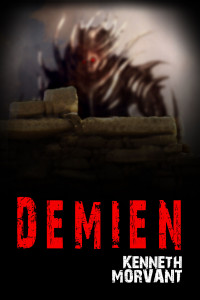 Demien is a painstakingly researched novel with an interesting premise, reminiscent conceptually of Arthur C. Clarke’s Childhood’s End. Clarke’s Overlords, however, are nothing like Morvant’s creatures.

I will say first that I do not normally review books with religious content. That is my personal preference. However, I am glad I made an exception for Demien, as while it was religious in overall tone, the message was not overt enough to interfere with the story’s read. Far more emphasis was put on the historical treatment of the world’s religions and how they, when examined together, provided clues as to what and who the protagonists were facing. Furthermore, I like some physics in my books, so if you’re the sort who enjoys geeking out over discussions about matter and energy, get in there.

Where the book fell short, unfortunately, was in developing the characters of the protagonists. Dialogue tags were inconsistently applied, sometimes to the detriment of clarity. (Additionally, I’m one of those horrible people who prefers the very mundane “he said/she said” dialogue tags; somewhere where the author and I differ. That’s personal preference, however, and everyone is free to disagree with me on that!)

I also found that there were a number of times when the characters said, “What we need to do is create this complex device…and it’s done!” which felt as if the author were jumping too quickly through the steps. The reader doesn’t necessarily want to hear about the welding and fusing and calibration, but having a character complain about skinning their knuckles whilst using a wrench or fighting with a stripped screw allows the reader to “feel” the team working together, and why it’s necessary for such a crack team to be involved in putting this stuff together. I’d have liked to see more work and more interior life.

Still, the author may have made these choices in the interests of keeping the book moving, and that it does! Want to read about physics, ancient religions, and what really came out of those flying saucers? Then you want to read Demien. You can get it on your Kindle here, or read the back cover below!

The Nephilim, abominations that represent the offspring of the “sons of God” and the “daughters of man,” have stepped out of the shadows in a bid to conquer humankind.

All the while, beings far more terrifying than what the public thought was discovered at Roswell are crossing dimensions in a bold gamble to capture Earth, enslave humans, and destroy the Nephilim.

And in between: HUMANITY.

Young physicist and archaeologist Trevor Pendleton is tasked with assembling a team to unravel the mysteries of the natural and supernatural that threaten to ravage mankind and rip the world apart.

Time is short and the stakes could not be higher.