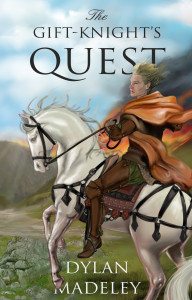 “Chandra had yet to fathom why Jonnecht could not have lived and ruled for many long years, or why it was so urgent that she ascend immediately.”

Chandra never asked to rule Kensrik, but fate took a strange course. Known as a usurper and sorceress by most and traumatised by all that has transpired, she is forced to make use of the few loyal allies she has in order to hold together her restless empire. In an attempt to identify and defeat the conspirators who inadvertently landed her in power, Chandra risks putting the lives of many in mortal danger, as well as her own.

Derek is an aimless wanderer – the youngest in a lineage that has long fallen from nobility. He finds himself summoned by tradition to serve a family historically considered his bitter enemy. As he journeys down the same path a fateful ancestor once travelled, he struggles with personal demons and begins to reconsider his loyalty to the mission.

Duke Lenn found one true cause in love and it cost him everything. His legacy shaped the present in which Chandra and Derek find themselves. Now their choice will shape the future of Kensrik…

The Gift-Knight’s Quest is set in a new and vividly imagined world, written with delicate prose that will allow the reader to explore with their imagination. Inspired by authors such as Michael Moorcock, J. G. Ballard and Roger Zelazny, it will appeal to fans of fantasy and historical fiction.