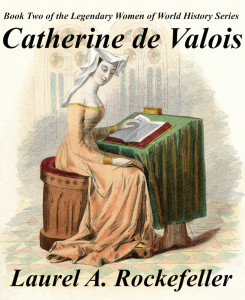 Best known as Henry V’s Agincourt bride from Shakespeare’s “Henry V,” Catherine de Valois was an extraordinary woman of faith, courage, and conviction in an age of politically powerful women.

A younger daughter to King Charles VI of France terrorized by his mental illness, Princess Catherine survived the ravages of his schizophrenia, a civil war at home, and King Henry’s war with France to become one of England’s most fascinating and courageous queens. Her second marriage to Owen Tudor gave England a new dynasty through her grandson, King Henry VII.

Meet the real Catherine and discover the beautiful true story that launched the most famous dynasty in history.